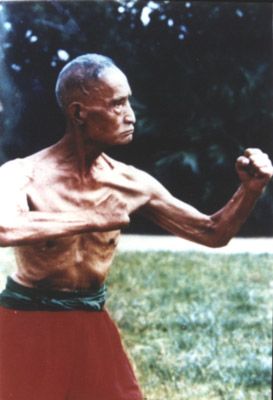 Ziranmen is an unusual and rare Chinese martial art that has no set forms (taulu), but rather advocates a fighting style that is spontaneous, free and natural. Ziranmen is based on ancient Taoist philosophy and Traditional Chinese Medical Theory, and is a combination of combat techniques with physical training, conditioning, qi gong/chi gung and meditation. The development of natural fighting movement and a strong spirit is achieved through various repetitive drills that include circle walking, attack and defense combinations, the holding of postures, shadow boxing and exercises with iron balls and rings. Through training, Zi Ran Men enhances the spirit and mind, regulates the circulation of Qi (Chi) and develops physical sensitivity.

Successfull application of the Ziranmen theory leads to freedom of movement. Attacks and defence become fluid, agile and natural. 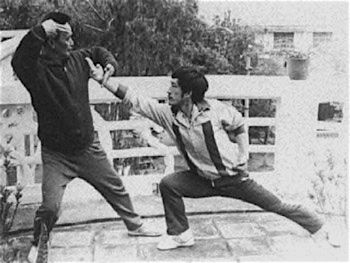 Ziranmen style resembles movements of the monkey and the tiger. The monkey characteristics are mobility, quick agile footwork, playfulness and quick change between true and false attack. The mental characteristic of the monkey is non-attachment. This means not being fixed to one idea, one technique or one course of action, but being able to change all the time like the monkey who quickly loses interest in one thing and then goes on to another. This gives the opponent nothing to hold on to.
The tiger characteristic is patience, stealth, light stepping and solid, ferocious attack.

Initially, students learn particular forms and follow certain rules. Through practice, these movements progress from awkward to natural. When this level is reached, you can fight successfully. The methods of Zi Ran Men combat follow the rules of nature - apply the techniques without thought, movements come from nothing. 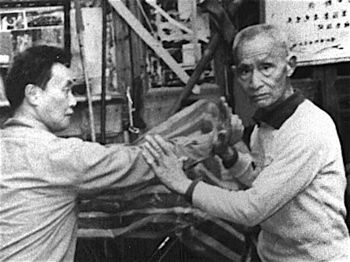 "Back like a bow" refers to the use of the spine in internal martial arts. The bow shape refers to a smooth convex curve of the spine which is used to store energy and create the correct postural alignment for fa-jin, power release. The bow shaped spine is like a coiled spring or a strung bow, ready to release power in a wave-like motion. The uniform curve of the spine is called pre-heaven posture. Pre-heaven refers to the characteristics of a baby before it leaves the womb of the mother and the posture is the same as that of a baby curled up in the womb.  In Chi Gung this shape is used for generating and conserving chi by closing what is called the micro-cosmic energy circuit.

Hands like arrows refers to the way the hands are propelled outward during power release. Punches are unseen by the opponent, thrown like a knife. The hands hold the form of 'Ghost Hands' and have the feeling of grabbing like a steel hook.  Block like iron, stick to the enemy like glue. Thus, your opponent will be unable to avoid the attack.

The eyes reflect the spirit. Eyes like shooting stars are bright, sharp, clear and fast.

Ziranmen was founded by a dwarf called Xu. According to legend Dwarf Xu was raised by monkeys and he learnt his skills by having to fend for himself in the wild. Dwarf Xu used to smoke a long pipe... Dwarf Xu taught his skills to Du Xin Wu after he beat Du Xin Wu in a challenge. When Du Xin Wu started his training with Dwarf Xu, Master Xu instructed him to walk the circle (Ai Dang Bu Nei Qian Shou) and nothing more. After months of this training, Du Xin Wu complained and Dwarf Xu explained the importance of this basic practise as Qi Gong for health and longevity, and Gong Fu for fighting skill. Observers at the 1928 Nanjing martial arts competition report that when Master Du performed the Ai Dang Bu Nei Qian Shou for the crowd, he moved so quickly that his body seemed a blurred shade while his eyes remained clear and solid.

It is said that Du Xin Wu was forever testing the skill of Dwarf Xu, by launching surprise attacks on his Master, but the young Du Xin Wu never got the better of his master. Du Xin Wu became a legendary figure in Chinese martial culture, known for his fighting ability and movement skill. Du Xin Wu taught the art of Ziranmen to Wan Lai Sheng. Master wan was also renowned for his fighting skill and combative nature, and is generally remembered as a hardened fighter, who travelled the length and breadth of the country to engage with other martial artists. Perhaps less emphasised however is his scholarly nature and strict, devout approach to training.

Master wan Lai Sheng started teaching Ziranmen publicly and also popularised it by writing many famous books on martial arts. It is said that Bruce Lee had Master Wan's books in his collection and it is probable that Ziranmen had an influence on Lees own style, Jeet Kun Do.

Wan Lai Sheng is most remembered for his fighting exploits. In 1928 he participated in the open combat competition at the Central National Martial Arts Institute in Nanjing. The competition was brought to a premature conclusion due to the fierceness of the bouts and the dangerous injury toll. However the organisers and competitors had seen enough to recognise individual skill, and Master Wan was honoured as a champion. He, along with four other elite martial artists from that event, was called upon by the Guandong Guangxi Commander in Chief Li Ji Chen, to establish a Martial Arts Institute in Southern China. In Chinese martial arts history, this event is now known as The Five Tigers Head South.

Master Liu Deming in Melbourne is a fith generation lineage holder of the Ziranmen system. Liu Deming and his master, Hong Zheng Fu, were both students of grandmaster Wan Lai Sheng.

"There are many different styles in Chinese martial arts  internal and external; southern and northern; broad and straight sword, spear and staff; long and short fist  each with its own merits. To practice martial arts is, in fact, to practice the coordinated movements with ones hands, eyes, shoulders, elbows, wrists, thighs and knees - thus Kung-fu! Through the use of Jing-Qi-Shen (essence-energy-spirit, some would say body-mind-spirit) as the foundation, and hands, eyes and body as the root to nourish Qi to a pure and natural energetic force, one will not be easily stirred by external influences and will be able to use ones gongfu to face and conquer his opponent.

Ziranmen emphasizes three styles of gongfu  soft, hard and light. It teaches three character traits  wisdom, benevolence and courage, and four virtues  trustworthiness, righteousness, chivalry and bravery. Ziranmen, as indicated by its name, calls attention to a natural state during practice. As in learning any skills, in the beginning one will feel very unnatural (which is but a necessary precursor) before one can attain naturalness. Without following the rules coupled with hard work, how can one achieve that day of natural fulfillment which is Ziranmen Kungfu?  With time spent practicing the set forms and adherence to the principles, over time one shall attain this natural state.

In addition to defense and conditioning, martial arts also helps one get rid of bad habits and can increase ones energy and spirit. It can offer ten times the benefits of any other hobby. It promotes peoples mental and physical health, and enhances friendship through joint efforts in international research and friendly competitions. Essentially, martial arts is a practical study for self-enhancement and the foundation for nurturing a strong will.

Chinese martial arts are profound, the more one learns the deeper one finds it. When one can reach the point where essence is developed in the bones and qi in marrow, long-life and long-lasting vision will result. Martial arts does not only help one build a healthy body, it also helps build a dignified personality and a joyous charitable spirit. As learning progresses, boundless energy and hand and eye dexterity will be attained, and ones character will become flexible and honest. To this end, one can easily achieve goals of helping others, benefiting oneself, and living in harmony with all. In a word  different."